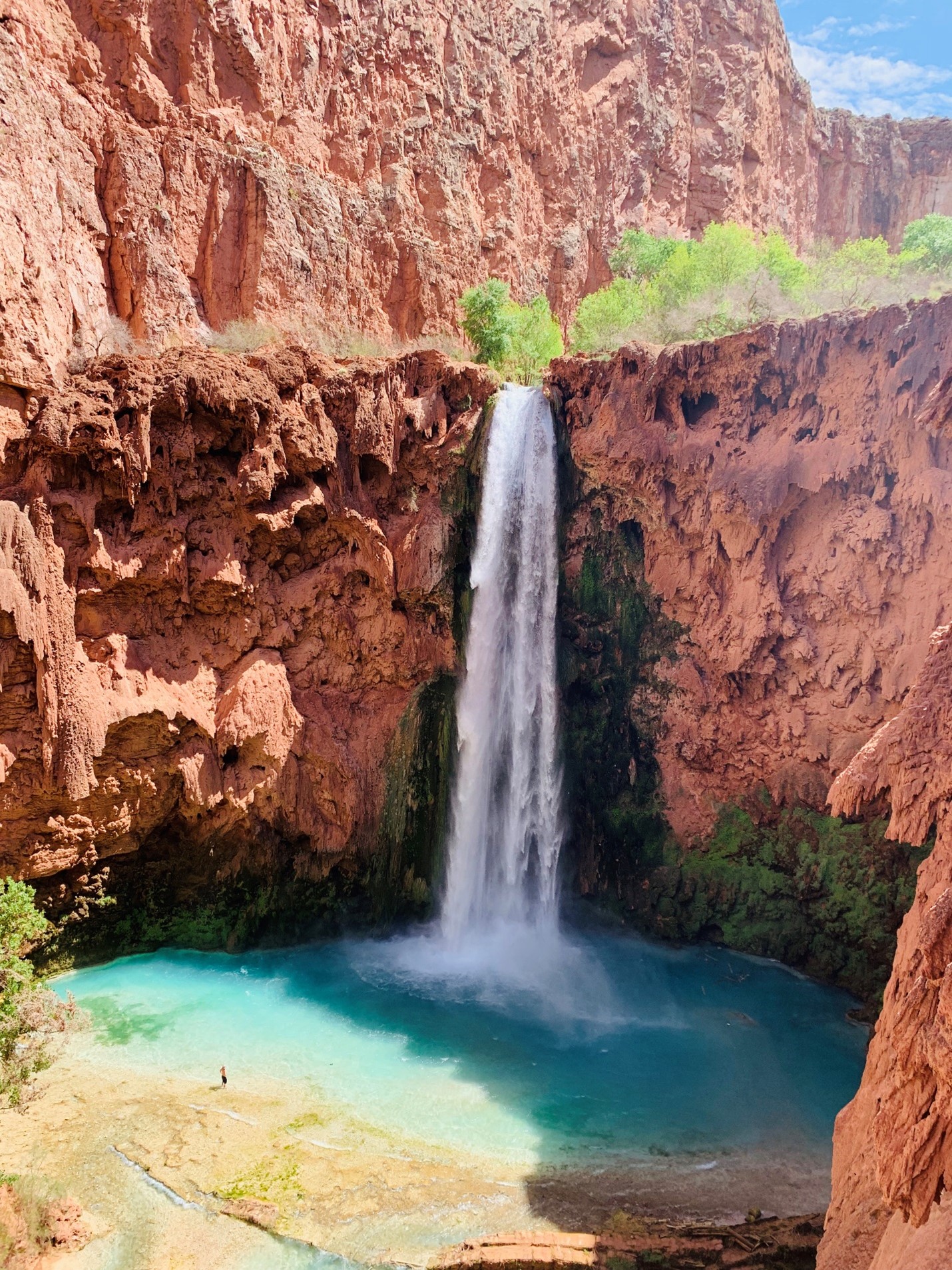 To get to Havasupai, you have to drive to the canyon’s trailhead, park your car, mount all of the things you need to live on for the next 3 days on your back, and hike 10 miles down into the canyon. The hike in, although not overly technical, was a litmus test for our endurance – mostly due to a bit of over-packing and the attempt to turn car camping gear into backpacking gear (side note: don’t do that).

We set up camp next to a canyon wall with a big cave. The river splits into a series of small streams due to the undulating ground in the campground. These streams are littered with mini waterfalls and camping islands are accessed by homemade bridges made of fallen trees and strategically placed rocks. The campground sits in between the two biggest waterfalls, Havasu Falls upriver and Mooney falls leading down to the Grand Canyon.

We got a taste of Havasu Falls on our hike in but got to appreciate it’s true beauty and power on the final full day in Havasupai when we spent the entire day hiking and swimming in the terrain and pools around the falls.

The more ambitious falls to see are Mooney and Beaver, both requiring us to scale down the rock wall to reach the base of Mooney Falls. The climb involved first descending through a cave starting near the top of the falls and ending about halfway up the face of the cliff. From there we descended the rock face (made of slippery sandstone due to mist from the falls) using strategically placed chains and rock footholds. This descent (and climb back up) is surprisingly technical and brought out the inner free climber in all of us.

The hard work immediately paid off though – you are left at the base of the massive 200+ foot Mooney Falls crashing into a pool of Caribbean blue water. The sheer power of the falls dominated all 5 of our senses and left us in a mesmerizing state of awe and wonderment.

We continued our journey through the canyon for another 4 miles to see the series of waterfalls and swimming pools making up Beaver falls. The hike there felt like a scene from Indiana Jones – traversing rivers, scaling more rock faces, and wading through wild grape pastures.

The entire canyon is unbelievably stunning. It truly is a fertile oasis deep inside a rut in the Earth’s crust in the middle of a desert. I’ve never seen anything like it. It’s paradise.

Break in the hiking boots before the hike. Camp on one of the islands closer to Mooney Falls. Spend more time exploring the area around Beaver Falls.

Be trigger ready on February 1st when the lottery for permits goes public – you only have a few seconds before it sells out. Also pack only what you need and make sure it’s light – 10 miles one way on a dry riverbed is tough when you pack like your Aunt Julie going to Florida for the winter.

How remote this place is. The only way in and out is to hike, ride a horse (if you’re a local), or get a ride on a helicopter. Supai is considered the most remote village in the lower 48 states and is the only place in North America where mail is still carried in and out by mule.

Feeling lost? Check out the Trail Book to find more