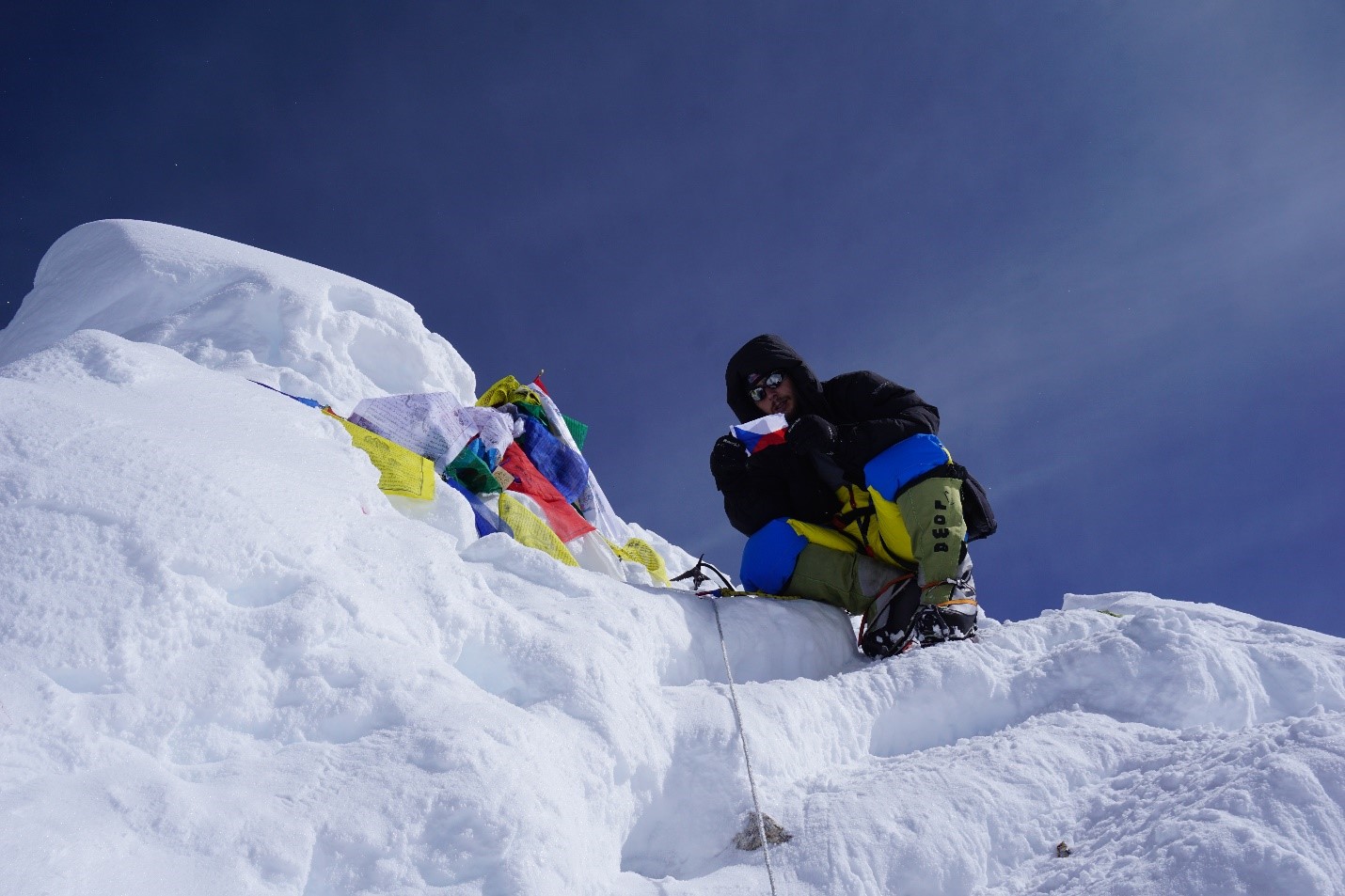 The ultimate goal of this expedition was to reach the summit of Mt. Manaslu (8,163m = 26,780ft) without supplemental oxygen. However, as always, life typically decides to act upon itself and chose different paths for us to make the experience even more interesting.

My story starts in a very ancient and chaotic city, Kathmandu, where I spent a few days organizing equipment, food, and supplies for the expedition. There I also met the other co-climbers, our Sherpas and the cooks. Once the team was ready, we all took a 4WD to get us as far into the mountains as possible and from there we utilized mules that accompanied us during a one-week long hike to the base camp (BC) at 5,000m. This place became my home for the next 3 weeks.

The climbing part itself is very straightforward and after setting up and organizing the BC we started our acclimatization routine. During this process, my body was slowly exposed to thin air, which forces it to create more red blood cells and adjust to the altitude. Acclimatization is typically done in so-called “cycles” during which a person ascends to higher camps (C1, C2…). First, we hiked to C1 (5,700m) and returned to BC the same day. For the next cycle, we went to C1, spent the night, and climbed to C2 (6,100m) then back to BC. During the third cycle, we went to C1 where we spent the night, C2 again spending the night, touched C3 (6,700m), and returned to BC. Between each cycle, there were one or two rest days.

During the final summit push, I spent a half-day at C3 where I tried to sleep and gain as much energy as one can at 6,700m. We woke up at 9 pm, melted snow for water, and started my final summit push. We pushed through the night and kept going strong towards the summit accompanied by one of our Sherpas. Unfortunately, at 7,500 ish meters, the altitude took its toll and I was not able to continue. At that point, I used our team backup oxygen bottle to recoup and reach the summit. Due to our exhaustion, we took 2 days to return to BC with stops in C4 and C3.

So, in the end, I did reach the summit and successfully descended, however with the supplemental oxygen. Most importantly, I enjoyed the whole experience and the people who made it special. Once you reach the top, there is no one there to celebrate your achievement. It’s down in the valley where life pulses and where you can share your memories with others. I’d love to thank my co-climbers Don, Lauri, and Natasha for making this experience very special!

There was a point during climbing the third ice step (20m vertical) when I had to push myself really hard to quickly escape the couloir to avoid huge chunks of falling ice. At that moment, I went past my physical (and aerobic) threshold, and I believe that was the point when I slowly started losing my battle with the thin air. I was not able to recoup from that physical strain at that elevation and kept deteriorating until 7,500 ish meters when I had to start using the supplemental oxygen. So, if I was to re-live my expedition, I would be more cautious about my aerobic capacity and maybe spend more time after the third ice step to catch my breath and rest.

After the summit push, which itself totaled six days spent at a really high elevation during which I was living on Mountain House dried food and instant noodles, the best food I ate was at the base camp where I had a sandwich with some black beans (real food!! 🙂 ). The next best meal that I ate was in Kathmandu upon our return where I ate a western-style steak in a local gourmet restaurant. It was so refueling to eat some good beef and consume protein that was much needed.

I don’t think there was a certain moment when I was literally caught off guard since one must always be well prepared when entering the mountains. And when things don’t go as planned, experience and improvisation come into play so that you are able to solve unusual situations. However, I approached the expedition with an open mind and felt kind of caught off guard after the experience as I had very mixed feelings about my summit. I did reach the summit, but with the help of supplemental oxygen. So, it took me a moment to process these emotions and find feelings of success and accomplishment.

Looking for more? Has the 3×3 left you high and dry? Don’t fret. Follow the Trail Book for more Veital!

If you’re reading from Wisconsin or Indiana, don’t forget to check us out in person through our beloved partners at:

Becker Supply Co. in Indianapolis, IN